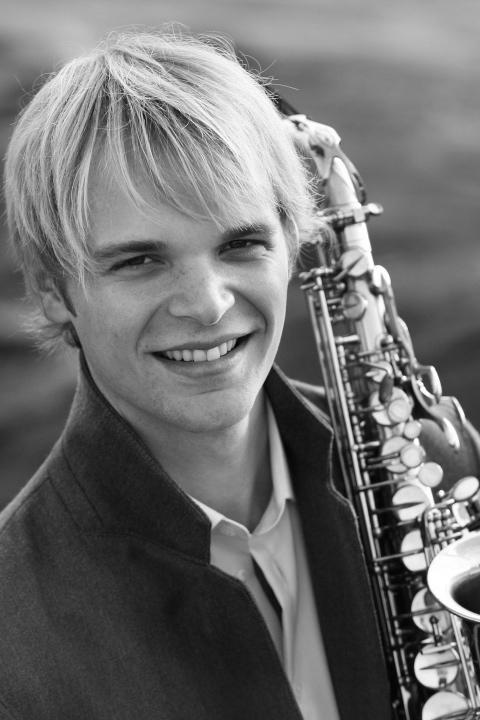 Saxophonist Joonatan Rautiola is one of today's most recognized young Finnish soloists and a brilliant representative of the new generation of Nordic classical wind players.

Joonatan Rautiola studied at the Sibelius Academy under Pekka Savijoki and in Paris with Nicolas Prost and Christian Wirth. In 2010 he became the first Nordic saxophonist having graduated from Claude Delangle's world-renowned Paris Conservatory saxophone class. His other teachers include clarinetist Paul Meyer and legendary oboist Maurice Bourgue.

Joonatan Rautiola has appeared as a soloist with the Finnish Radio Symphony Orchestra, Düsseldorfer Symfoniker, Mecklenburgische Staatskapelle Schwerin, Het Kamerorkest Brugge, Tapiola Sinfonietta, Kymi Sinfonietta, Mikkeli Orchestra and with several professional Nordic wind orchestras. He has given recitals in London, Dublin, St. Petersbourg and at New York's Carnegie Hall. During a five-year long membership in the award-winning Quatuor Ellipsos, Rautiola performed in prestigious French concert venues such as the salle Pleyel and Radio France, and appeared together with world-class artists and ensembles - Eric le Sage, Jean-François Zygel and the Quatuor Voce.

Equally in demand as a teacher, Joonatan Rautiola teaches at the Sibelius Academy and at the Tampere Music Academy and has given masterclasses at the Helsinki, Nantes and Strasbourg Conservatoires, Senzoku Gakuen College of Music (Tokyo) and the Trinity College of Music (London). Since 2012, he has taught at the Bretagne International Saxophone Academy with Alexandre Souillart and Hiroe Yasui.

In 2013, Joonatan Rautiola premieres Tapio Tuomela's Saxophone Concerto with the Joensuu Orchestra, appears as a soloist with the Latvian National Symphony Orchestra, the Mikkeli Orchestra and the Finnish Guard Band and gives masterclasses in Latvia and Portugal. 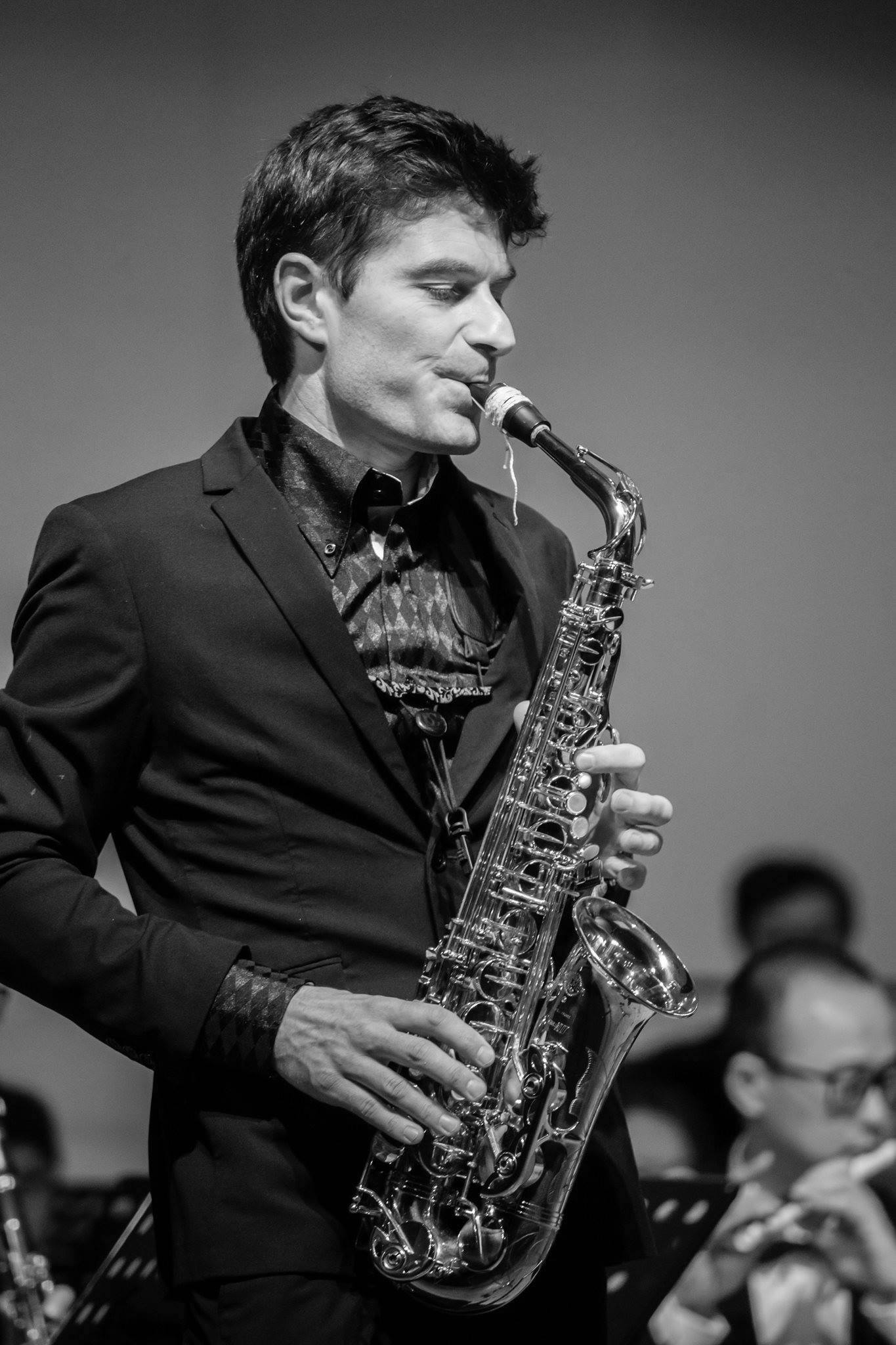 Dedicated chamber musician, Alexandre Souillart founded the Duo Atyopsis with the pianist Matthieu Acar. The duo actively seeks to enlarge the repertoire for saxophone and piano and has encouraged several composers to write works for it. Atyopsis has performed in France, Italy, Great Britain, Greece, Peru and Colombia and was invited at the Automn Festival of the Palazzetto Bru Zane (Venice) where it gave its historical overview program “From Berlioz to Debussy”.

Alexandre Souillart is a member of the Osmose Saxophone Quartet,, specialized in new music and in saxophone pedagogy. The group has appeared throughout Europe, from the Balkans to Great Britain, and has been invited to perform and give conferences in Taiwan. Osmose Saxophone Quartet recently performed Glazounov’s Saxophone Quartet at the Salle Pleyel and gave a premiere of their new pedagogical program “Four for Tango” at the Théâtre du Châtelet in Paris.

Alexandre Souillart teaches at the Clamart Conservatoire-CRD (Paris), as well as at the Bretagne International Saxophone Academy which he founded in 2012. He has given numerous master classes in Europa, Asia and Latin America.

Alexandre Souillart is supported by the Meyer Foundation, the Société Générale bank and the Tarrazzi Funds. In 2010, he was a laureate of the Oriolis-Kriegelstein Foundation.

Having first studied with Nobuya Sugawa and Kazuo Tomioka at the Tokyo Geidai University, Hiroe Yasui entered the graduate cycle of Claude Delangle's Paris Conservatoire saxophone class and the free improvisation and chamber music classes of the same institution. Devoted to contemporary performance, Hiroe Yasui has helped to create works making use of new technologies, collaborating with IRCAM's composers amoung others. Her work has resulted in the birth of new works combining music with visual media, most notably Masakazu Natsuda's Danse sacrée, danse profane au Pays d'extreme Orient, commissionned and premiered with Claude Delangle (first performance in May 2012, Paris).

Particularly interested in orchestral playing, she has performed with the most important orchestras of Japan. She regularly plays with the Siena Wind Orchestra and recently participated in a recording in Tokyo, directed by Yutaka Sado.

An active chamber musician, Hiroe Yasui performs with piano, voice and electronics and with the duo Atyopsis (Alexandre Souillart, saxophone and Matthieu Acar, prepared piano). With the duo Atyopsis, she was invited to the Lima International Contemporary Music Festival (Peru), where the trio gave world premieres of five new works by Latin American composers - a concert project that was later regiven in Columbia.

Hiroe Yasui teaches the saxophone at the Vannes Conservatoire (Western France) and in the Paris region. Since 2011, she has taught at the Bretagne International Saxophone Academy. Qualified with a Masters degree in piano which he obtained in 2010 after having been studied with Bruno Rigutto and Fernando Rossano at the Conservatoire National Supérieur de Musique et de Danse in Paris (CNSMDP), and with a Masters degree in chamber music having been taught by Pierre-Laurent and Valérie Aimard, Matthieu Acar is now developing his competencies in the advanced third cycle, at the same institution in a class devoted to contemporary music and creation.

Matthieu Acar has a keen spirit for learning and is inspired by all types of repertoires, of which he has in fact developed a particular affinity for contemporary music which he defends passionately and which he enjoys sharing with audiences in original and surprising programmes. He has thus participated in several first performances with piano pieces composed by Nicolas Mondon (Ravine and Klavierkantate conducted by Javier Gonzales Novales, pièces pour piano très peu préparé) and has recently taken part in the discovery, in France, of a two-hour triptych for four pianos by the American composer Julius Eastman during the 2012 triennial at the Palais du Tokyo, in Paris.

The Duo Atyopsis, which was formed in 2008 from the encounter with the saxophonist Alexandre Souillart, was invited to Venice by the Palazzetto Bru-Zane, the centre of French romantic music as well as to South America by the International Festival of Contemporary Music, held in Lima, Peru. This duo has regularly performed on numerous European scenes (London, Athens, Paris, Milan …) and in 2011, it won the international contest organised by the Societa Umanitaria of Milan, in Italy.

Also a pianist in the InSoliTus Ensemble, Mathieu Acar currently teaches piano in Normandy and Boulogne-Billancourt Conservatoire (92) and, in 2010, he was awarded the Sacem prize for best interpretation of a contemporary piece at the Piano-campus competition in Cergy-Pontoise as well as the Public prize at the last international piano competition in Collioure. 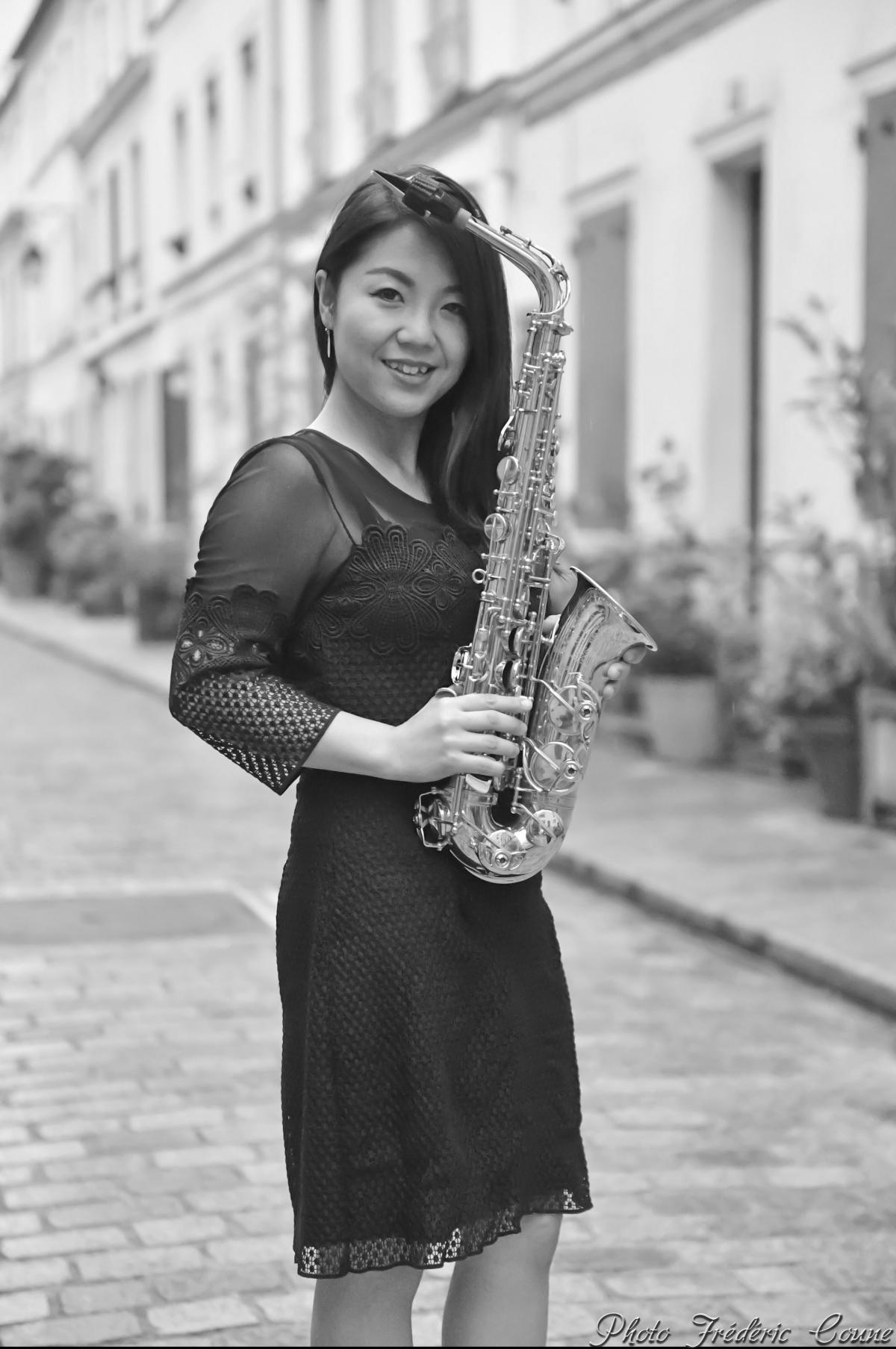 Born in Japan, saxophonist Miyu KODA studied at the Showa Music University (Kanagawa) and joined the conservatory of Cergy-Pontoise in the class of Jean-Yves Fourmeau in 2013. She obtains her DEM and the first prize unanimously of the jury in perfection course.

She participates in the International Saxophone Academy of Brittany in 2014 and 2015.

Since 2015 she studies in the Clamart Conservatoire in Alexandre Souillart saxophone class.

She received a scholarship at Showa Music University (2014).

Passionate about pedagogy, she joined CEFEDEM (teacher training center for dance and music) in Normandy in 2017. 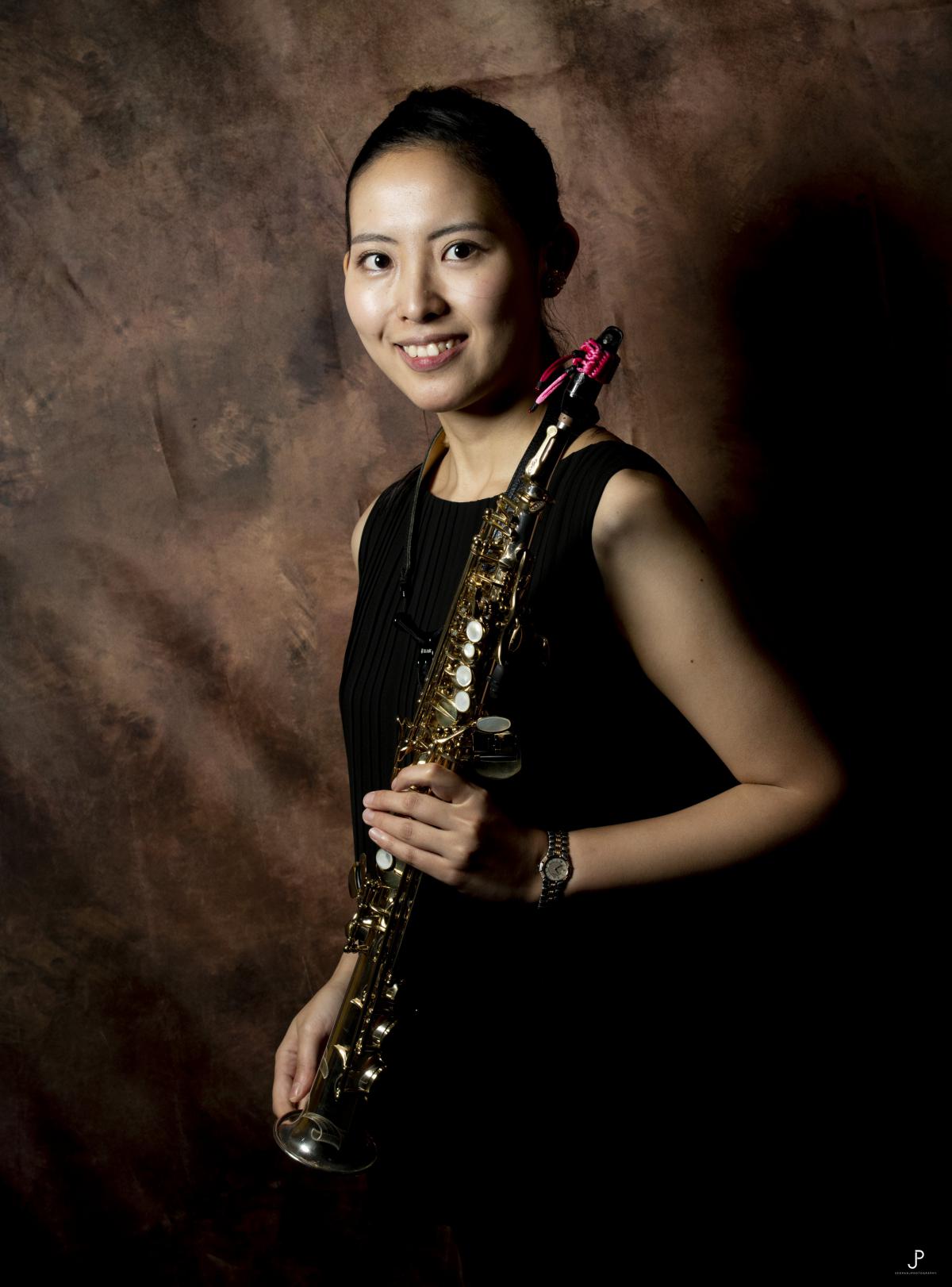 Miho Hakamada was born in Ichinomiya, Aichi, Japan. She started  to play the saxophone when she was 10 years old in the brass band club as a hobby and received her first lesson with a saxophone professor when she was 12 years old.

She graduated from Kobe University with a Bachelor’s Degree in Art Managements. While focusing on the art management studies, she also continuously following her passion for the saxophone and find time to work on the saxophone repertoire, during the school years, she was a member of an amateur brass band club.

During her exchange-student program in Paris-Diderot University in the faculty of literature and arts (2015-2016), she was inspired and decided to began her professional saxophone career after she had turned 21 years old. She entered Conservatoire à Rayonnement Régional de Paris (Conservatoire Municipal Jean-Philippe Rameau ) and worked with Professor Chiharu Lemarié where she graduated with a DEM degree in 2017.

She participates in the International Saxophone Academy of Brittany in 2016 and 2018. She is currently studying with Professor Claude Delangle at Conservatoire National Supérieur de Musique de Paris since 2017. She also studies in chamber music class (Saxophone and Piano) with Professor Jens McManama.

Beside being a saxophonist, she is also involved in organizing art projects and concerts such as the international art festivals, educational concerts and restoration art projects (Kobe,Tokyo) since she was in Kobe University.